As American As Apple Pie Cupcakes

I wanted to make something fun for the Fourth of July holiday and found the most adorable patriotic cupcake liners and toppers at a local craft shop.  When I was brainstorming a fun cupcake recipe to experiment with, Adam said “What’s more American than Apple Pie?!”  And thus, “As American as Apple Pie Cupcakes” were born. 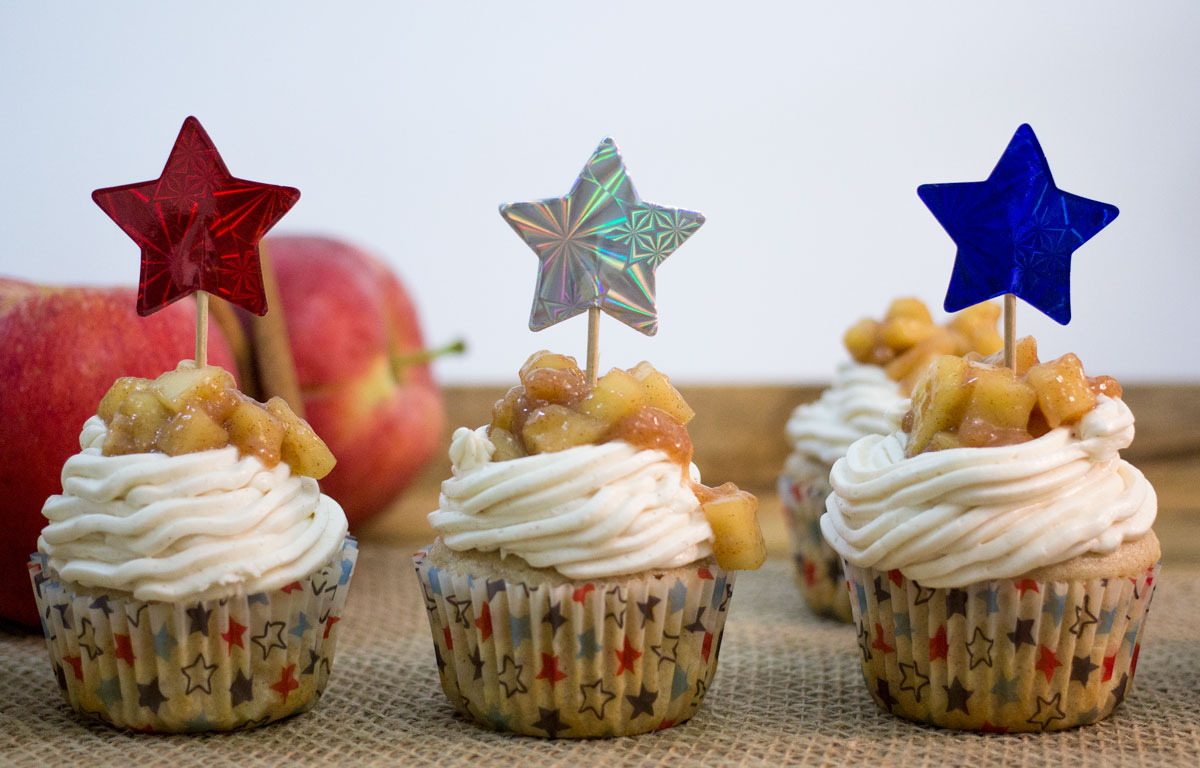 I spiced up gluten-free vanilla cupcake batter with cinnamon, nutmeg and cloves.  Then I created a cinnamon buttercream (that is pretty darn epic if I do say so myself!) studded with flavorful bits of ground cinnamon.  If you left off the apple pie topping and served the cupcakes as-is, these taste like cinnamon roll cupcakes.  And they’re awesome like that, too.

The apple pie topping is made from peeled, sliced Gala apples that I sautéed with butter, cinnamon, sugar and cornstarch to thicken things up! 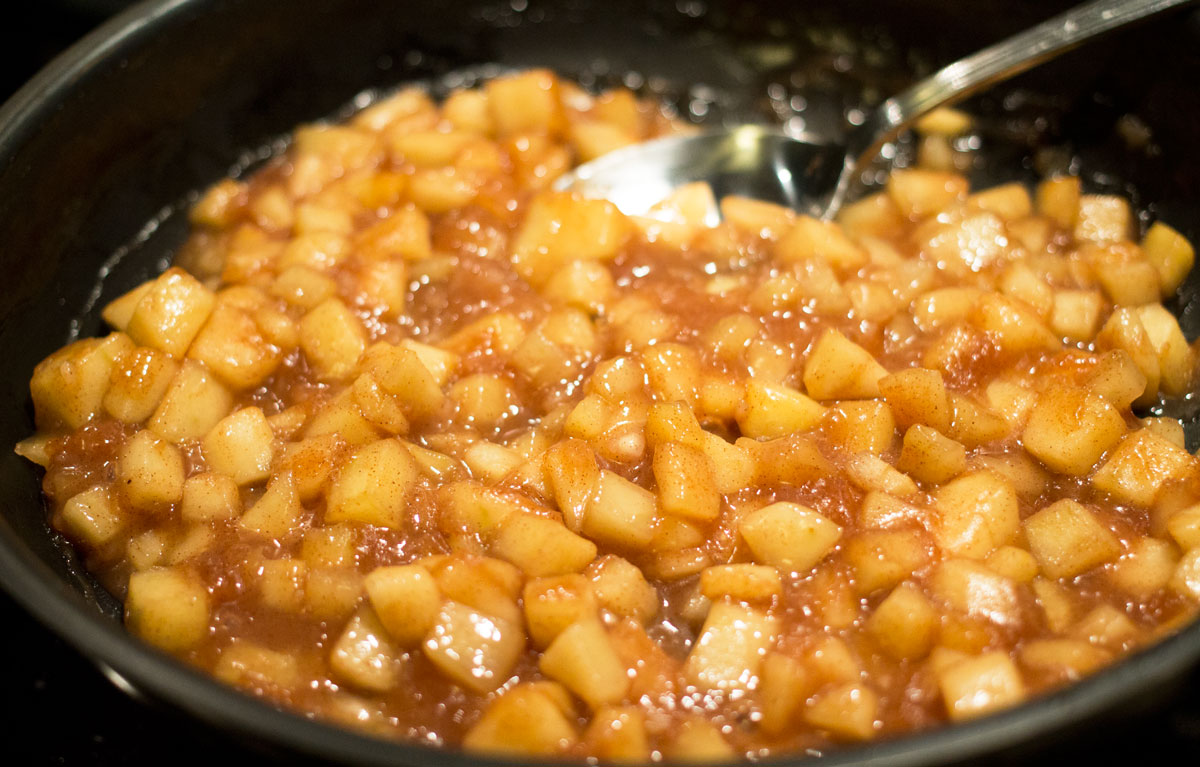 Our Gala apples seem to be in season and huge, plus I felt like they’d add the right amount of sweetness to the topping.  This would work with any apples you have on hand – If you go with a tart apple such as a Granny Smith, then I’d recommend adding a touch more sugar to the mixture. 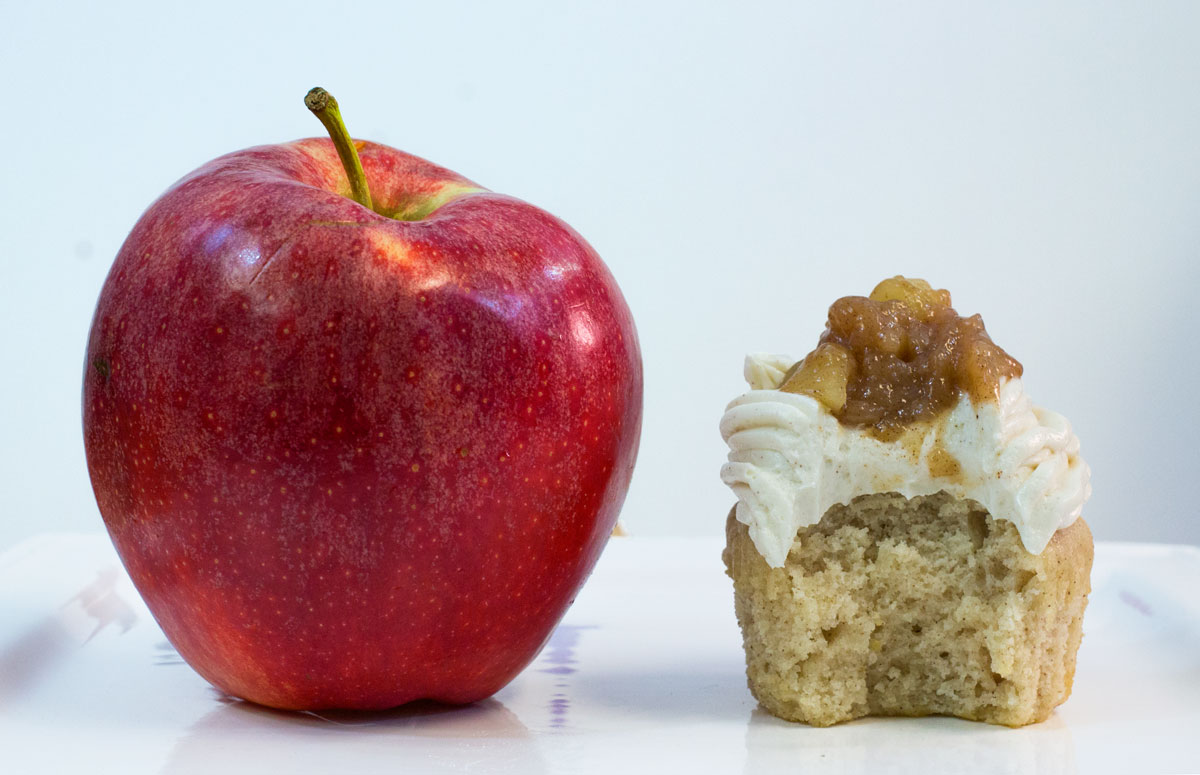 If you want to get really cute, you can create a lattice design with your frosting, to emulate the topping of a real apple pie.  They’re adorable topped with an American Flag pick.  Just look at that! 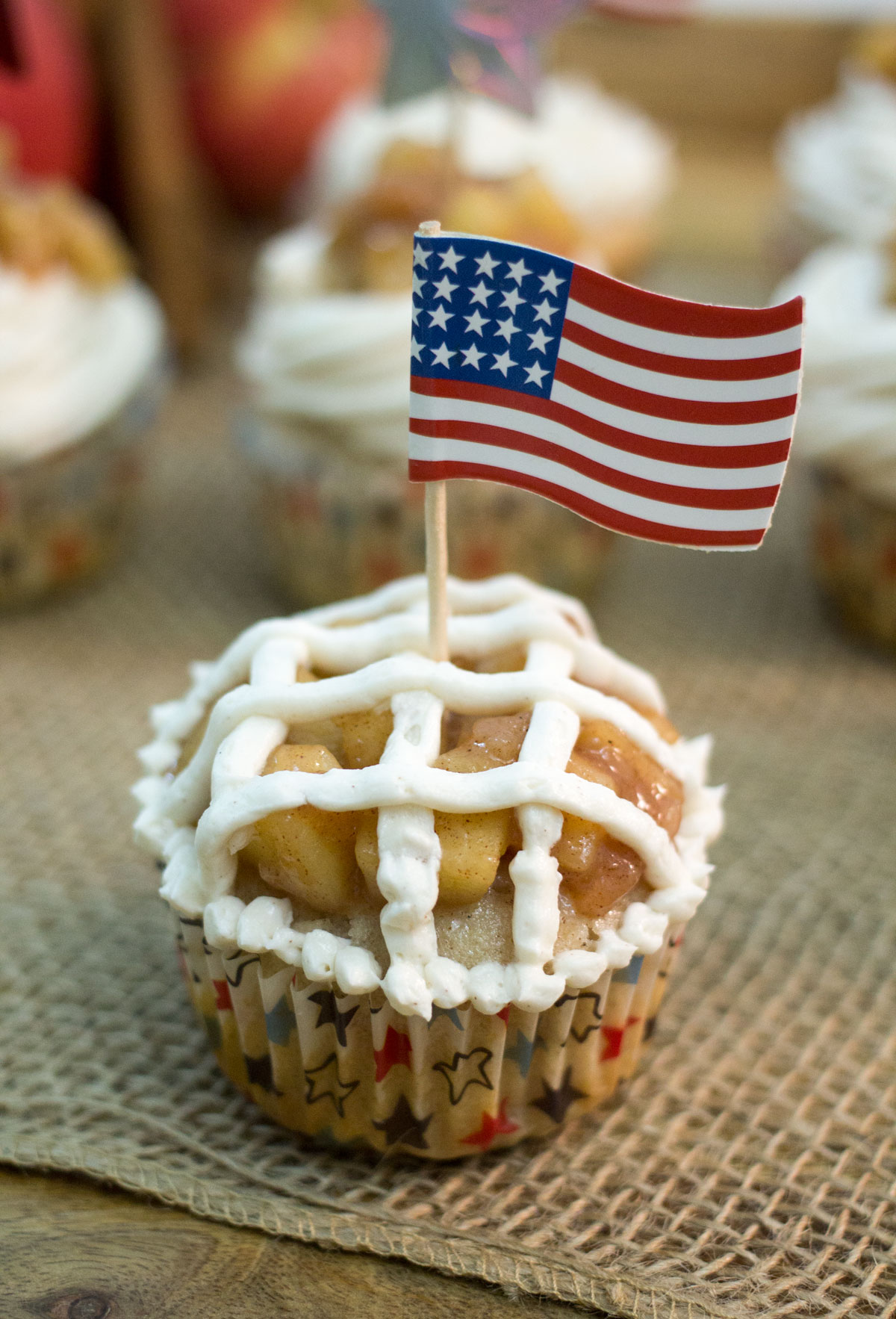 Or, if you prefer a more even frosting-to-cupcake ratio (or more frosting than cupcake, like I do!) then you can create a “well” of frosting and fill it with the apple pie topping.  It looks mouthwatering and beautiful dripping down the edges a bit.  You can’t go wrong.  Next time I might get a little crazy and drizzle some caramel on top for a caramel apple flavor. 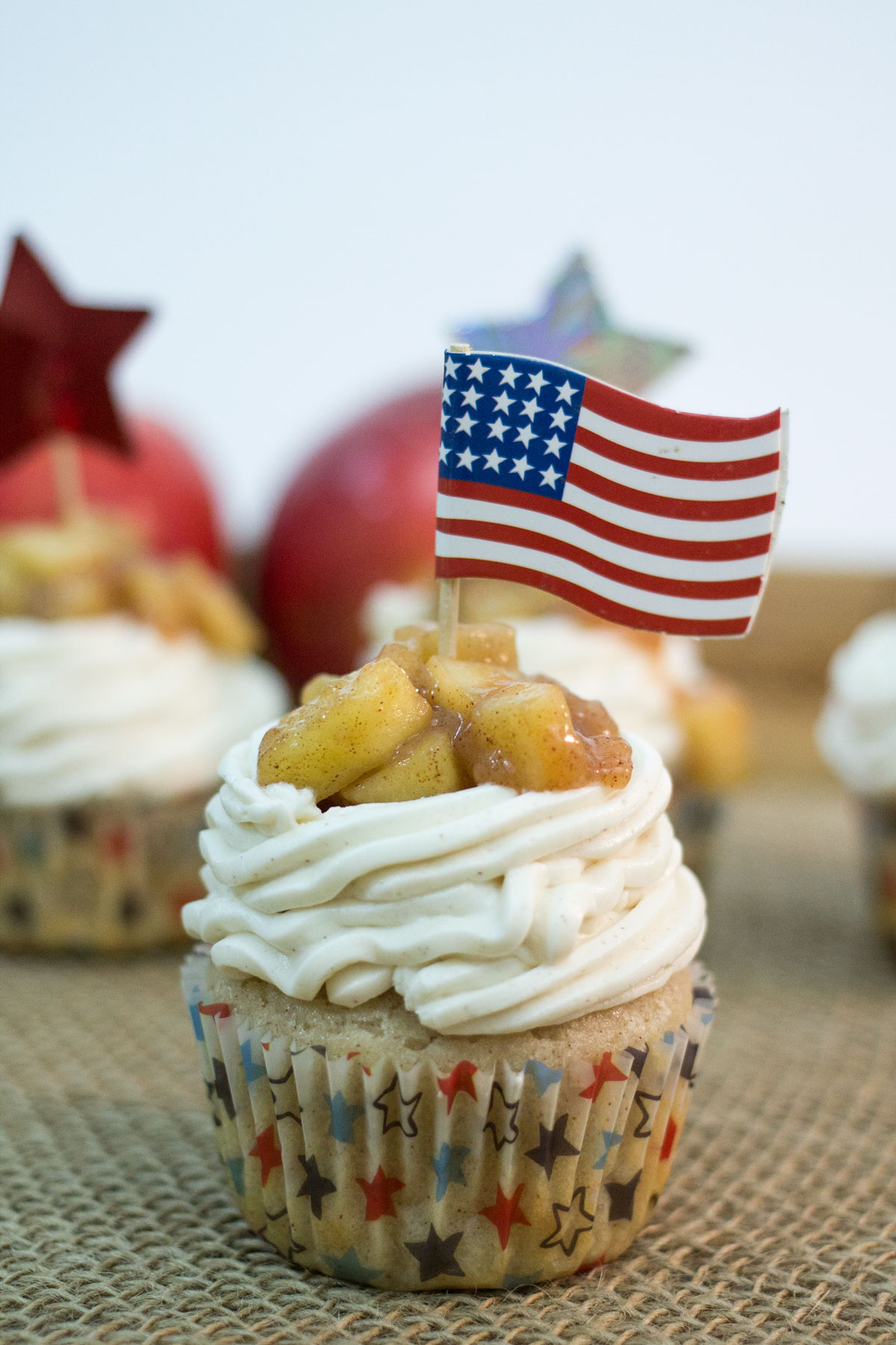 One important lesson I learned with these cupcakes, is that they taste best fresh!  I recommend making these the same day you plan on serving them.  They’re easy as pie (See what I did there?) and don’t take too much time to whip up, so if you can make them same-day, that is definitely best. 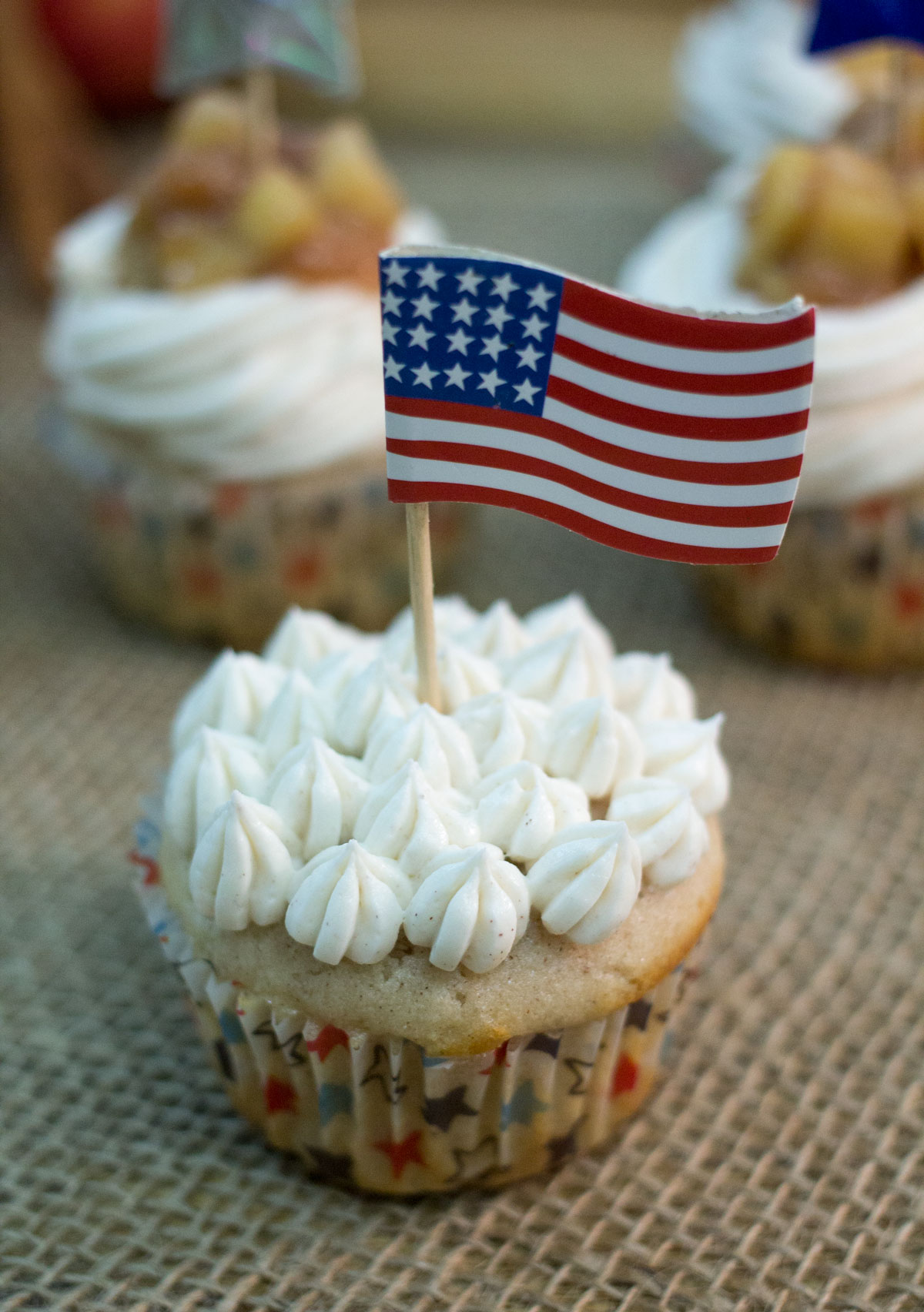 However if you have to make them a day in advance, whatever you do, don’t put them in the fridge!  The fridge dries out the cakes and makes the topping a little gummy.  Even if you let them come back to room temperature, the texture won’t be the same again.  (It’s okay to leave these cupcakes out at room temperature for up to two days.) 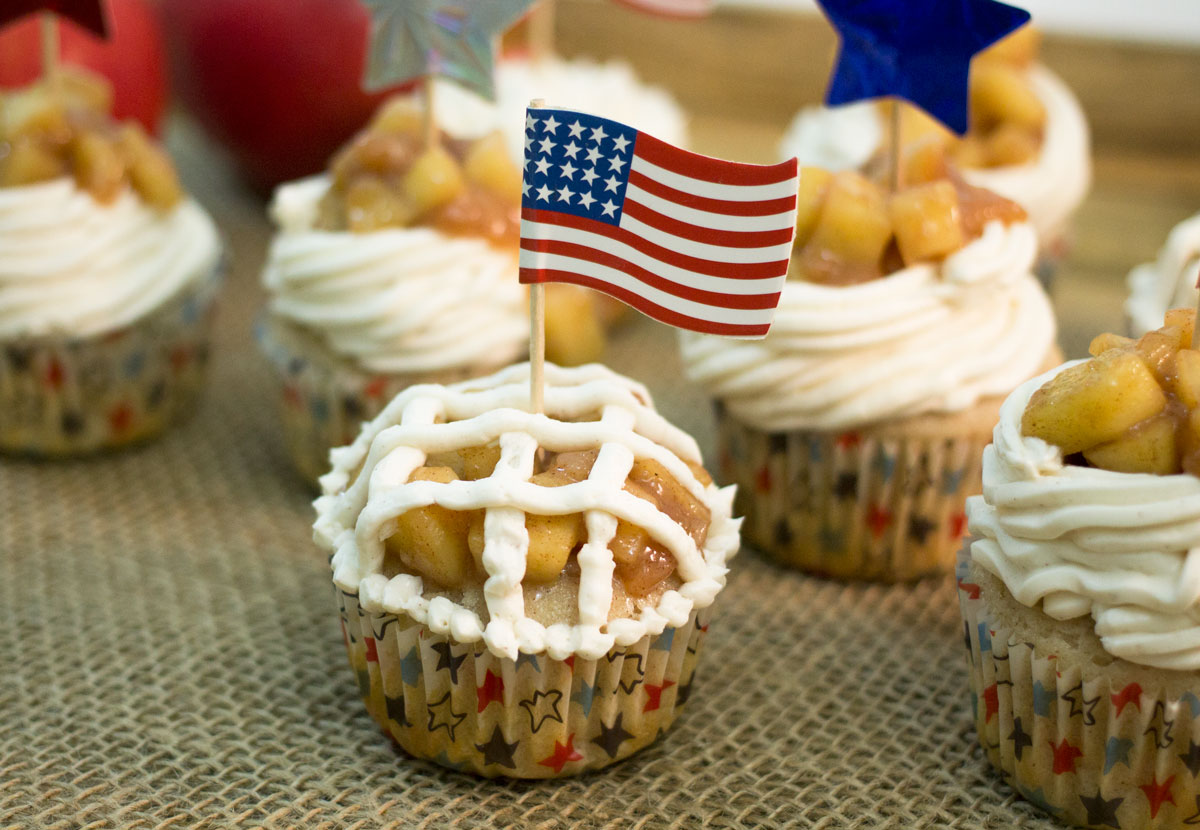 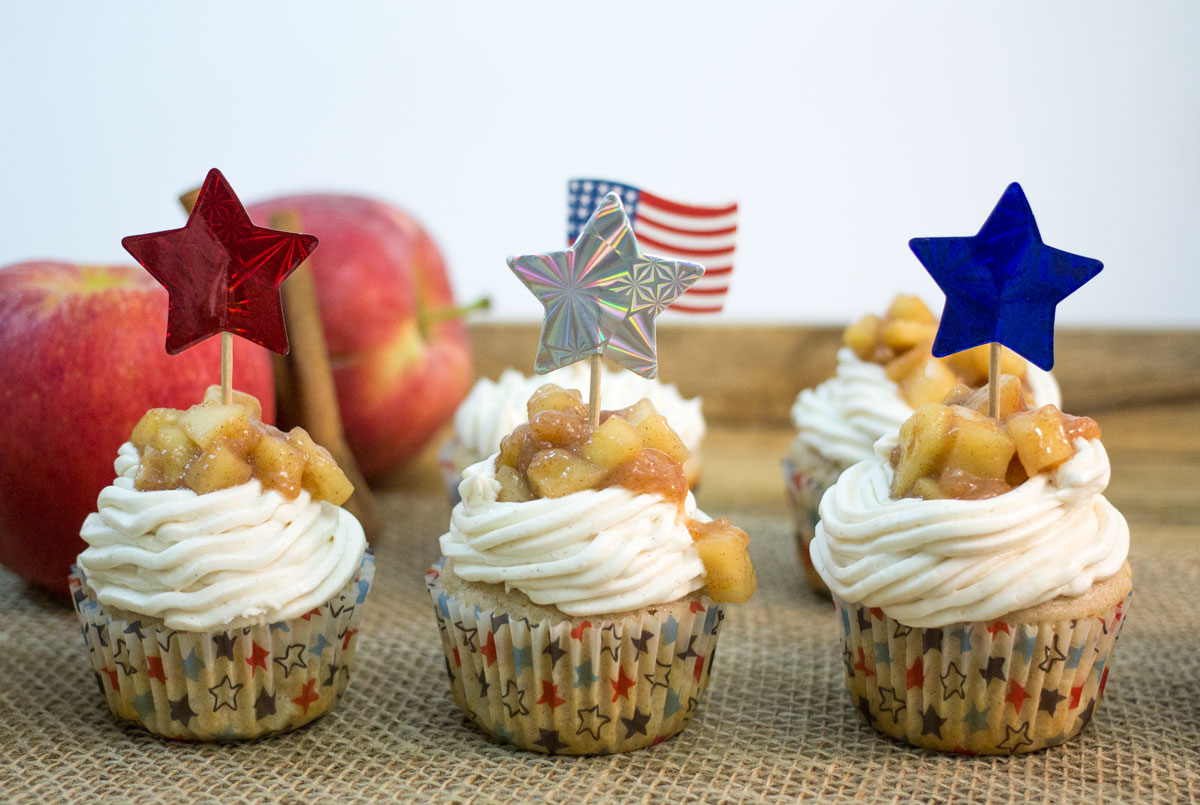 I hope you all have some fantastic plans for the holiday weekend!  You can find me lounging with a cocktail in one hand, and an apple pie cupcake in the other!

As American As Apple Pie Cupcakes