Our neighborhood borders a unique section of Orlando named the Mills 50 district.  Mills 50 is bursting with eclectic shops, hip bars and authentic Vietnamese and Asian eateries.

We’ve lived right outside Mills 50 for years, and often reminded ourselves that we needed to explore the ethnic cuisine.  But it wasn’t until about two months ago that we first ventured into Pho 88, an incredible Vietnamese restaurant in the heart of Mills 50.  I was slightly apprehensive and unsure what I would be able to eat given my Celiac disease.  Before our visit I researched the cuisine and learned that Pho (pronounced like “fuh” in “funny,”) a traditional Vietnamese noodle soup, is made with rice noodles!  And is typically gluten-free!  So I decided to give it a shot.

First our server brought out a plate overflowing with beautiful, fresh Thai basil leaves, lime wedges, bean sprouts and fresh jalapeño slices.  These are traditional Pho toppings to customize your soup.  There is also Sriracha and hoisin sauce on the table.  (I always add Sriracha, but I avoid the hoisin since it’s not gluten-free.) 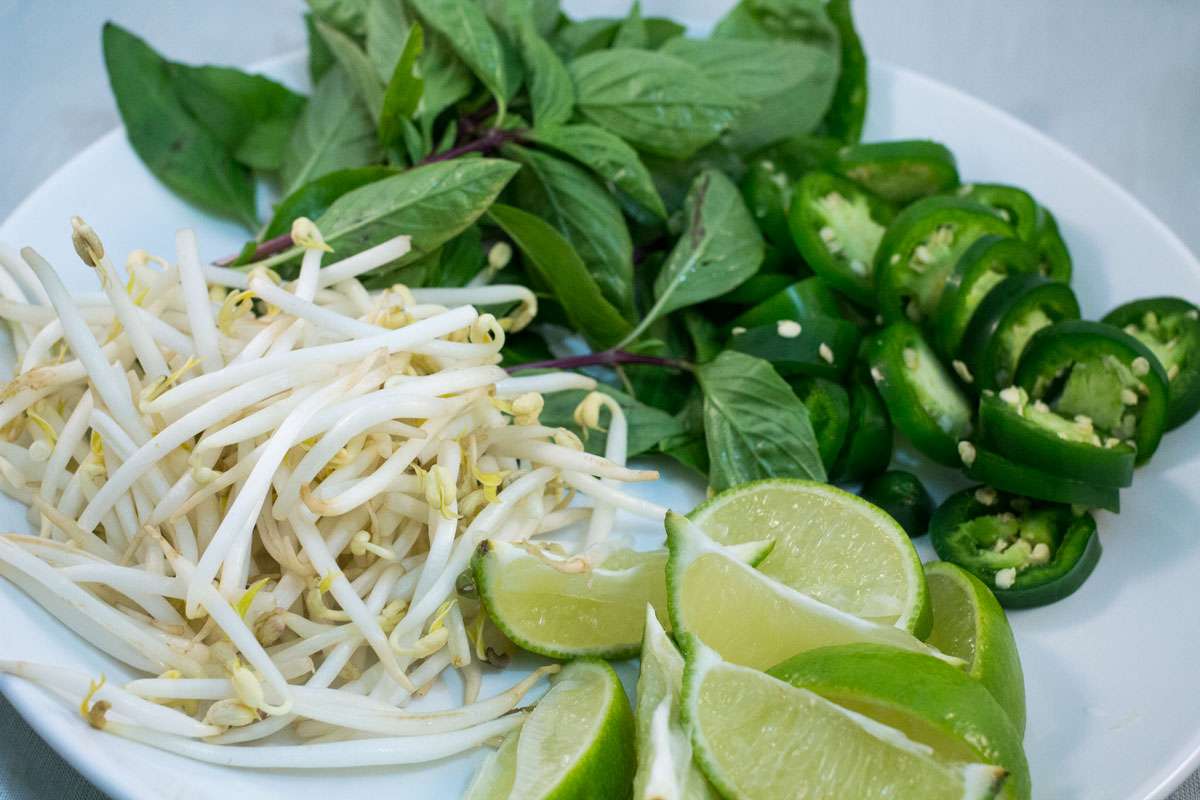 Then he brought our soups.  Massive bowls that were the size of my head, filled to the brim with an aromatic broth and an overload of fresh vegetables.  Mine had broccoli, mushrooms, green and red bell peppers, carrots, bamboo, baby bok choy, baby carrots, scallions and baked tofu.  It was absolutely phenomenal.  The soup had so much flavor on its own.  But the Thai basil leaves, lime juice, jalapeño and Sriracha enhanced the flavors even more. 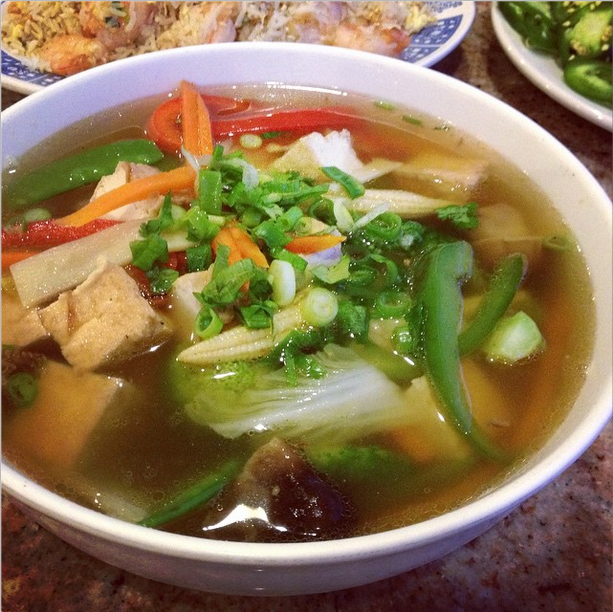 First time Pho everything! This is a picture of my first-ever bowl of Pho from Pho 88.

I was hooked.  I kid you not – we went back to Pho 88 (and I ordered the same exact dish) at least once a week for the following month, and then every other week from then on.  This stuff is magic.  (It also has the same “healing” powers as Chicken soup if you’re feeling under the weather!)  Another beautiful thing is that this gigantic bowl of noodle soup is only $8.50.  Plus, the portion is so huge I almost always get two meals out of my bowl.

They have a ton of other soup options with different types of beef or chicken as well.  But those soups only contain the broth, the meat and scallions.  I love that my veggie Pho is overflowing with vegetables and tofu, so I doubt I will ever change my ways!

I wanted to replicate this vegetarian Pho at home.  So I did some research and found a broth recipe that sounded delicious from the Kitchen Treaty.  Kare’s blog is lovely, and you should definitely check it out for some scrumptious vegetarian + meat-eater-friendly dishes!

Adapting Kare’s recipe slightly for the broth, I spent a Sunday preparing my new favorite dish at home.  I added in all of the same veggies that Pho 88 serves in their vegetarian Pho, plus I added some shrimp.  It was pho-nomenal! 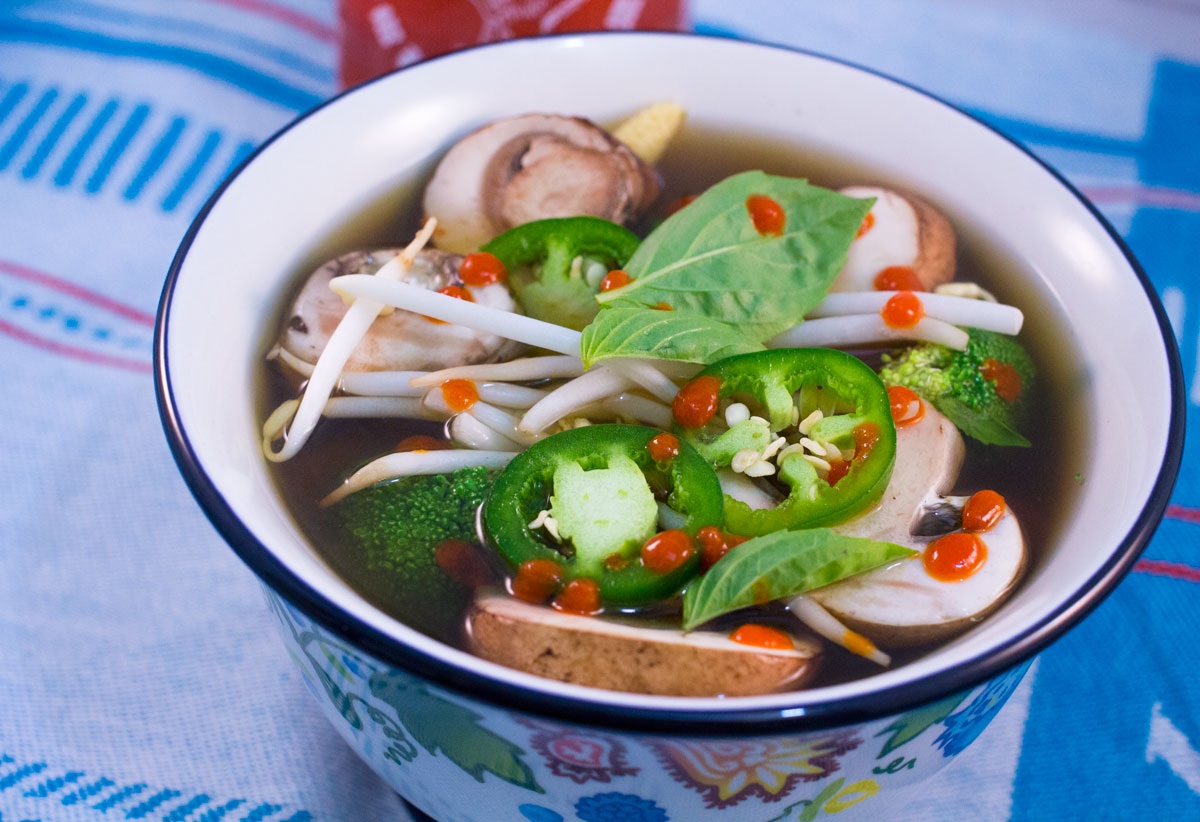 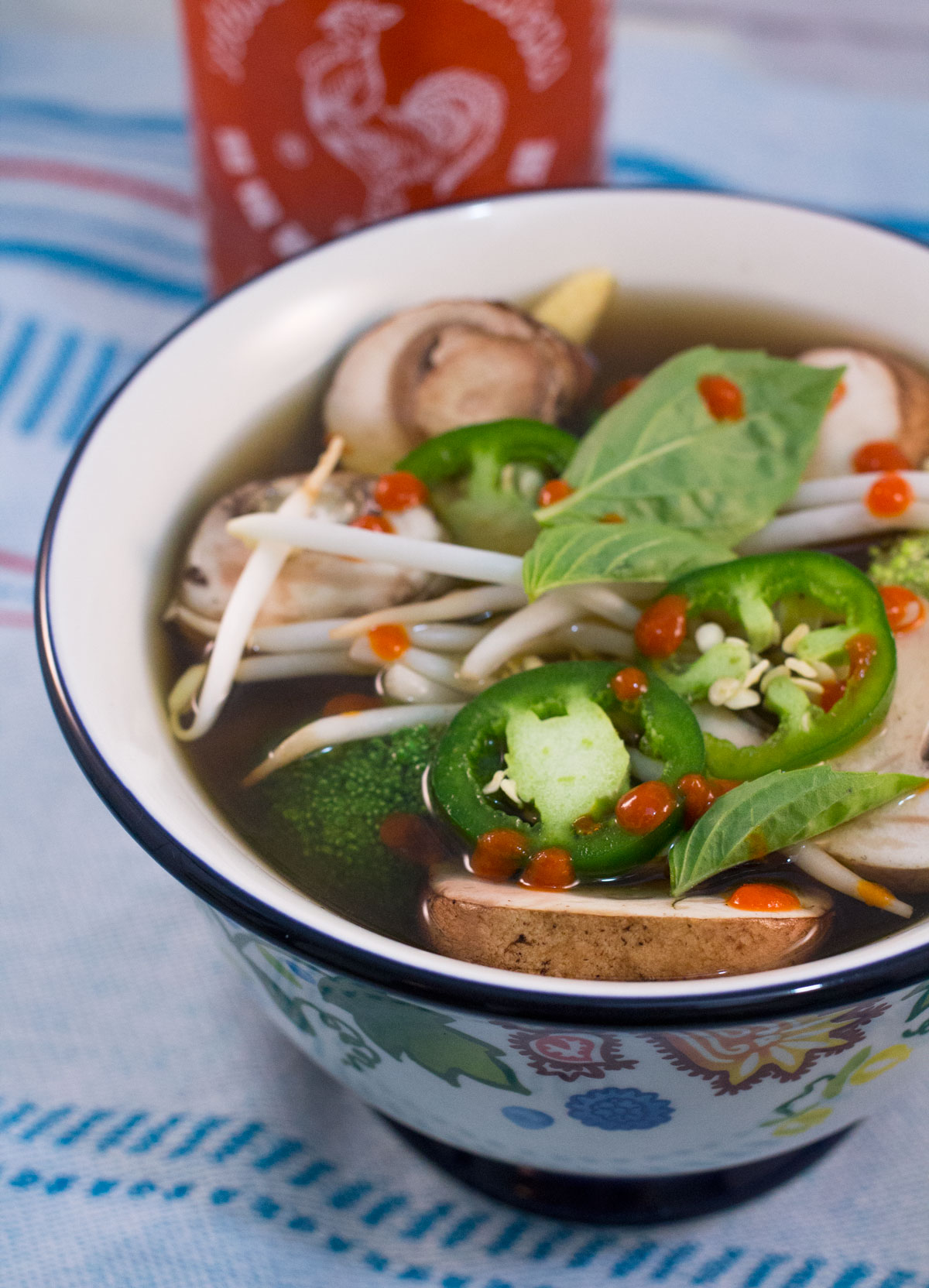 The broth is the key to the soup and contains a ton of spices and vegetables – onions, carrots, garlic, dried mushrooms, lemongrass, ginger, star anise, whole cloves, cinnamon, black peppercorns, brown sugar, salt and a dash of gluten-free soy sauce.  The water absorbs all of the delicious flavors and you strain out the solids before you serve.  The broth is pretty darn tasty on its own, too, if you don’t feel like adding all of the mix-ins! 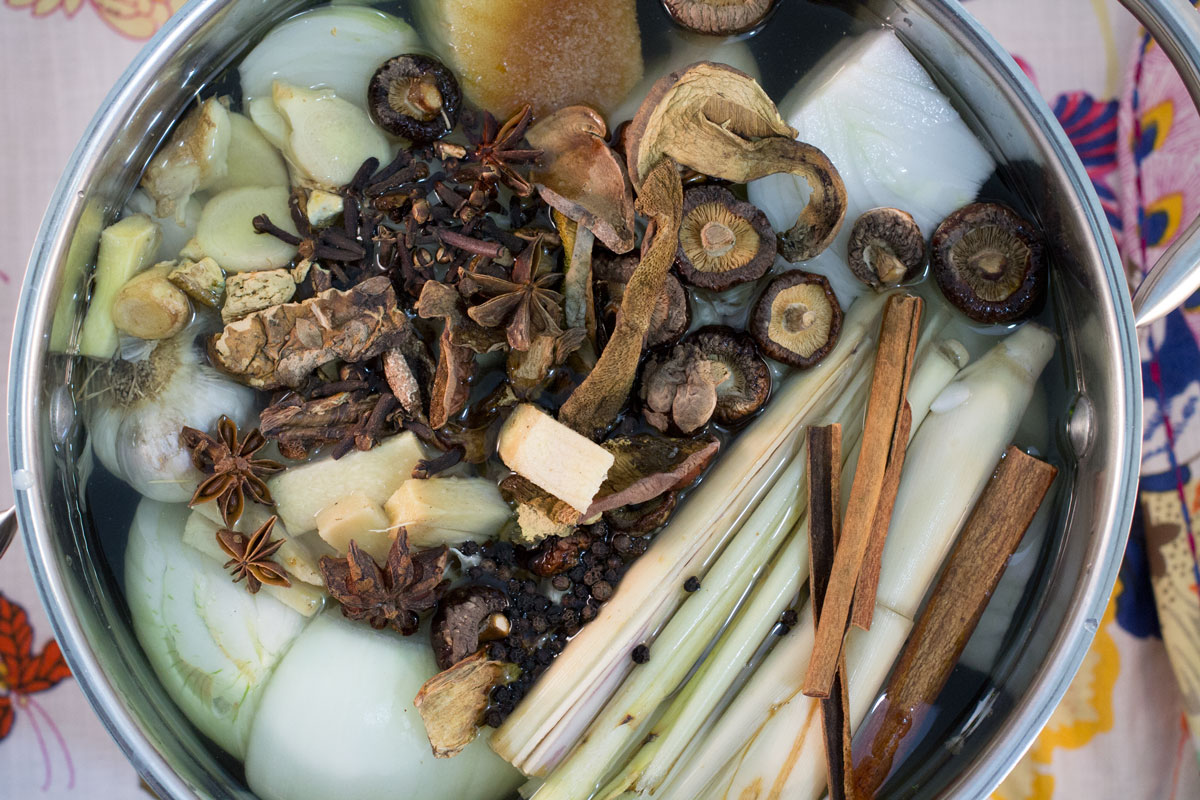 I couldn’t find Thai basil at my local market so I purchased some from the Vietnamese restaurant for our toppings plate! 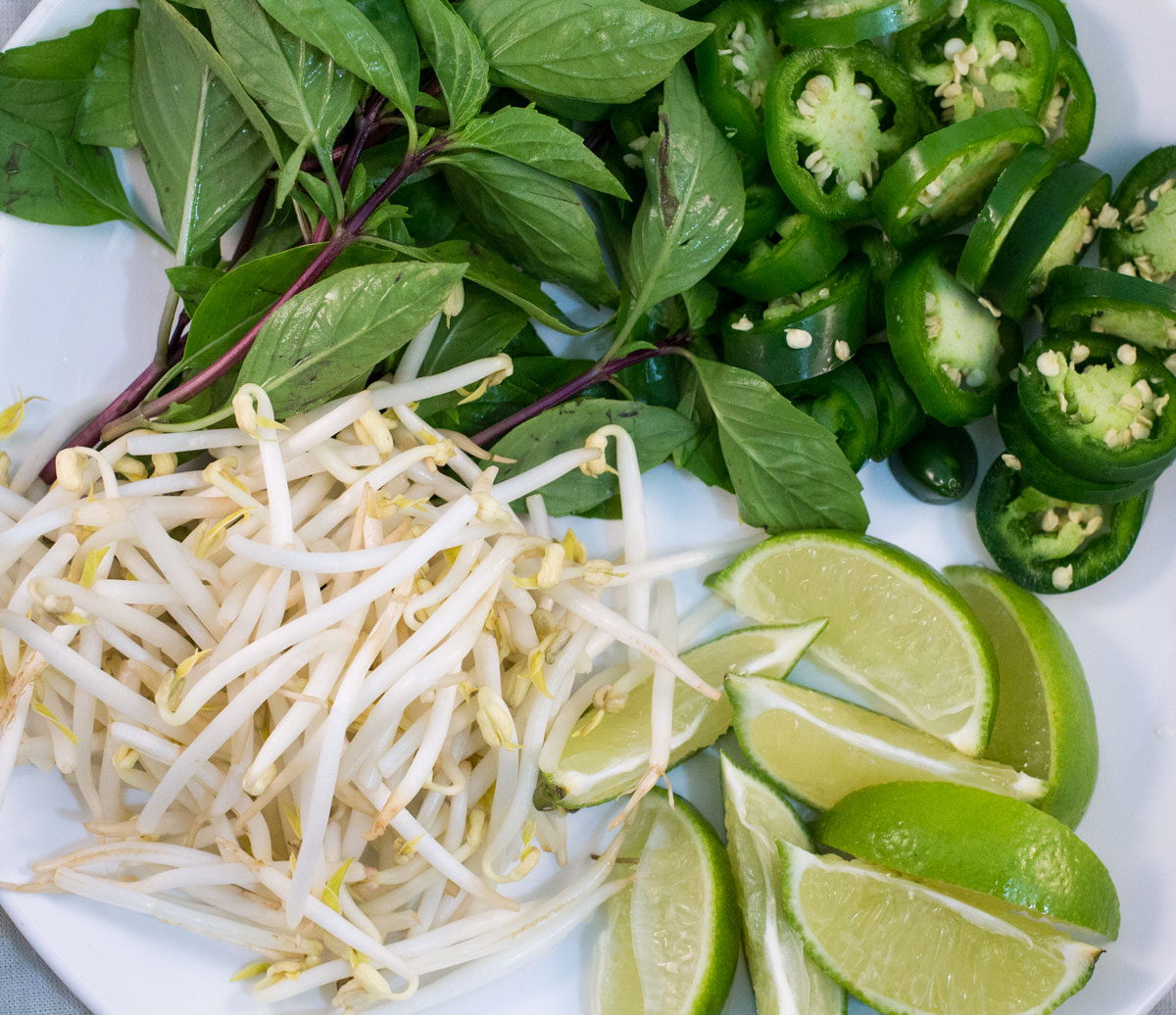 I added as many veggies as I could fit into my bowl, plus tofu and shrimp, to replicate the soup from Pho 88.  You can customize your Pho with whatever veggies or meats you like, and add as many toppings to you heart’s content! 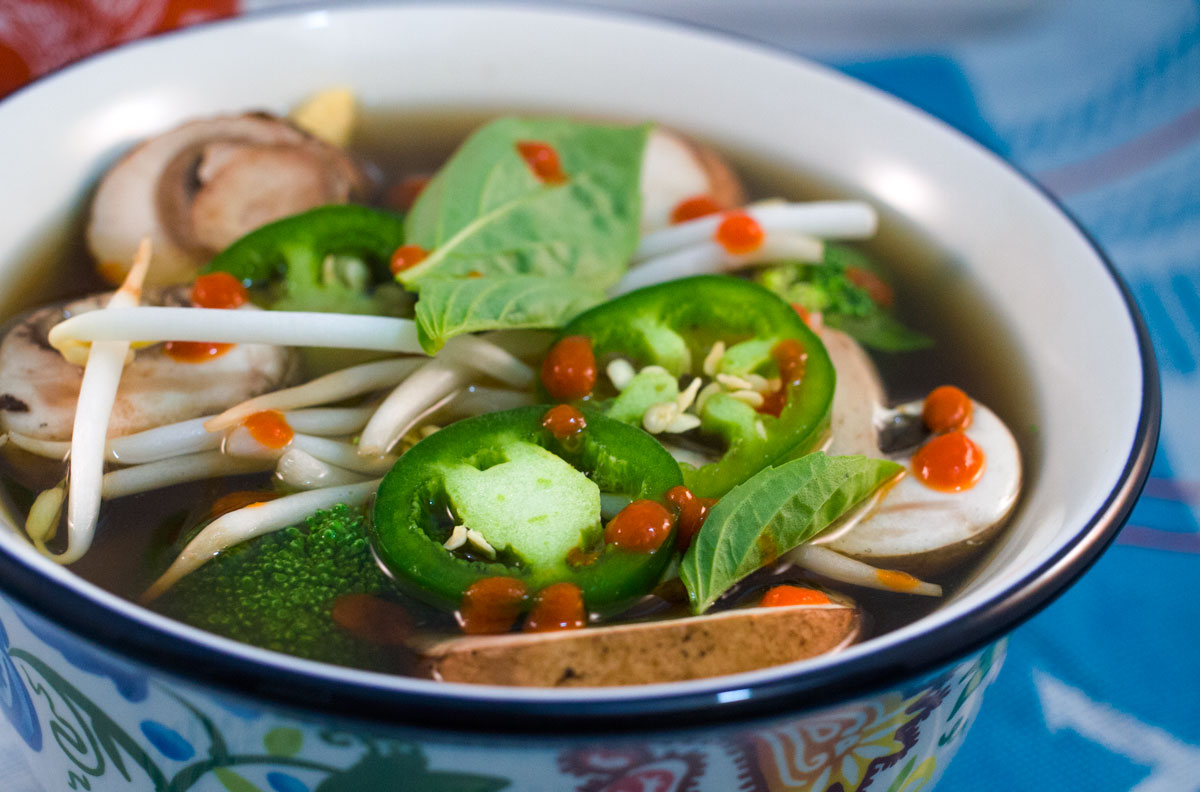 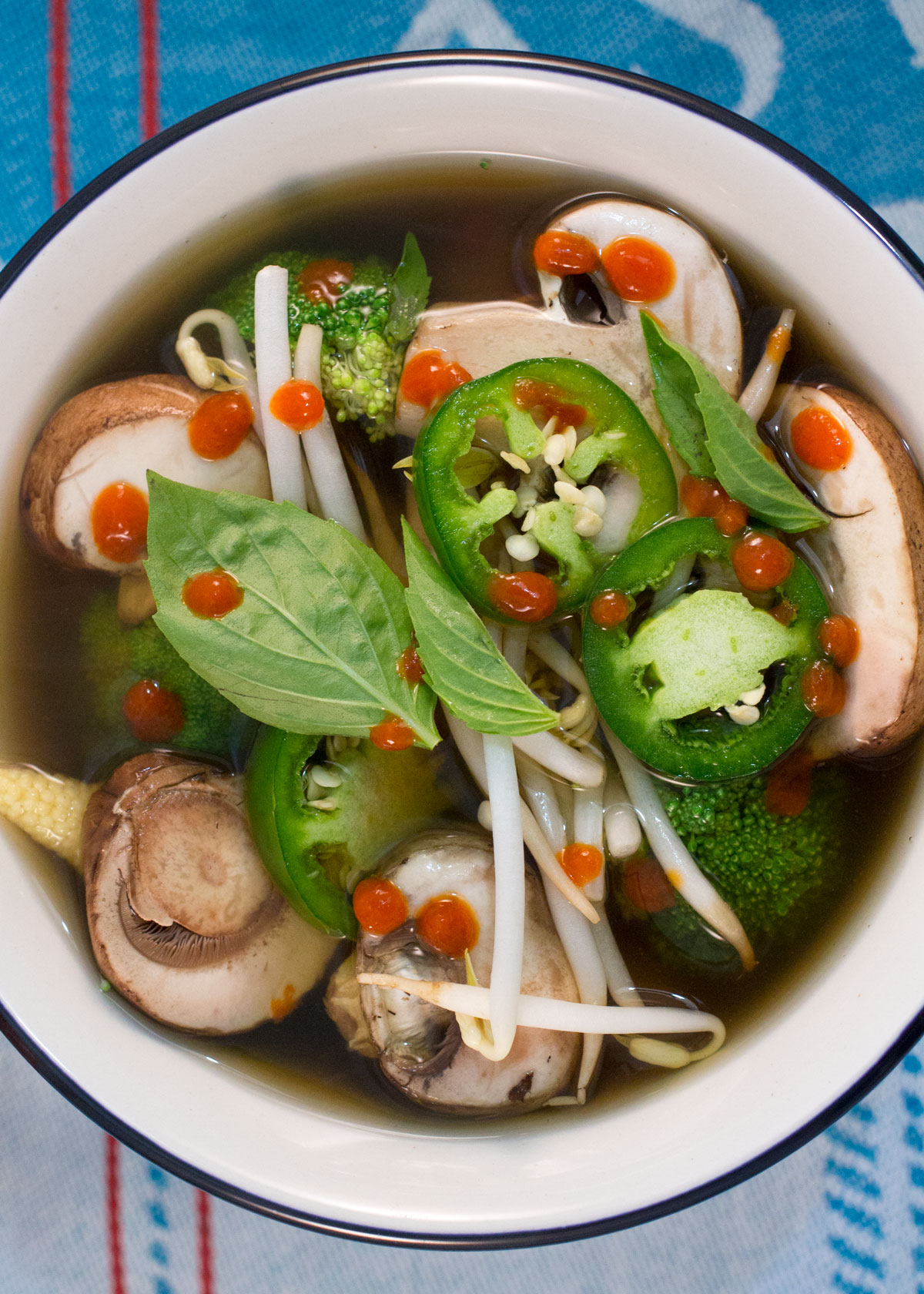 I’ve been out of town for the holidays for a few weeks, and cannot wait to get home to have some more Pho!  It’s that good.  Pho real.

Make the broth: 1.  Add water, onions, carrots, garlic, dried shiitake + porcini mushrooms, lemongrass, ginger, star anise, whole cloves, black peppercorns, cinnamon stick, and brown sugar to a large pot. 2.  Bring to a boil over medium-high heat, then reduce heat to medium-low. 3.  Simmer uncovered for 45 minutes. 4.  Remove from heat and let cool until safe to handle. 5.  Place a colander over a large bowl and pour broth into colander.  Discard solids. 6.  Strain one more time to remove all the bits and pieces.  The easiest way to do this is to place a fine-mesh sieve over the stock pot and pour the broth back into the pot, through the sieve. 7.  Taste and season with kosher salt and gluten-free soy sauce as needed. 8.  Return to the stove and bring to a boil. Blanch your veggies: 1.  Lightly steam or blanch your vegetables. 2.  Be sure to not season your veggies as you don't want the flavor to overpower the broth. Cook the noodles: 1.  Follow package directions to cook noodles. 2.  Strain and rinse under cold water to prevent sticking. Assemble your bowls: 1.  Add about 3/4 of a cup (or measure to your preference) of noodles to a large bowl. 2.  Top with blanched vegetables, baked tofu, and shrimp/chicken/beef if using. 3.  Carefully ladle boiling-hot broth over the veggies/tofu/meat. 4.  Top with garnishes of choice: fresh Thai Basil leaves, bean sprouts, fresh jalapeño slices, fresh lime wedges, Sriracha sauce, scallions and gluten-free Hoisin sauce.
Broth recipe adapted ever so slightly from Kitchen Treaty.