It’s 5 O’Clock somewhere.  But it was 7:30 to be exact when we sat down at Jimmy Buffett’s Margaritaville Orlando for dinner last Friday night.  Margaritaville just launched its refreshed menu, which features more than 15 new and enhanced dishes and drinks.

To celebrate the launch of their refreshed menu, they invited some Orlando bloggers to come and sample new menu items.  I brought three lucky friends! 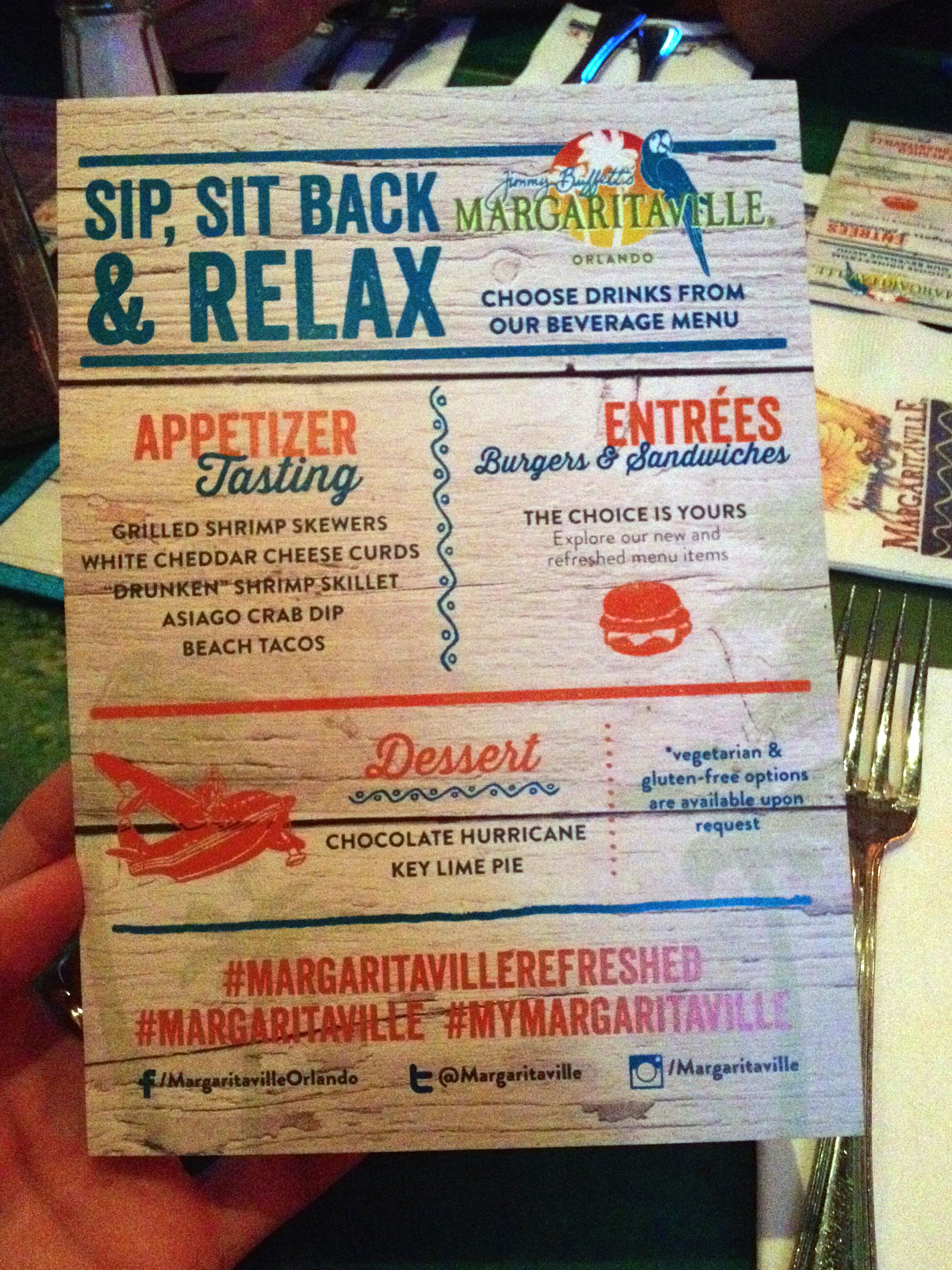 I have always loved Margaritaville, and travel there often to treat myself to their massive and incredible Volcano Nachos.  If you are a nacho fan, and you have not yet tried them, get off your couch and go right now.  They are seriously awesome.  And they can even make them gluten-free!  The portion is large enough to feed at least 6-8 people as an appetizer, but I’m going to be honest and tell you that I have tackled the nachos (as an entrée) with just one friend, and we almost cleared the plate.  But I digress…

To start, I had the Fins to the Left Margarita in an adorable souvenir cup that looks like a blender.  My friends had the Havanas and Bananas frozen drink which was really creamy and delicious, the Blueberry Pomegranate Margarita and another friend had the same margarita I ordered. 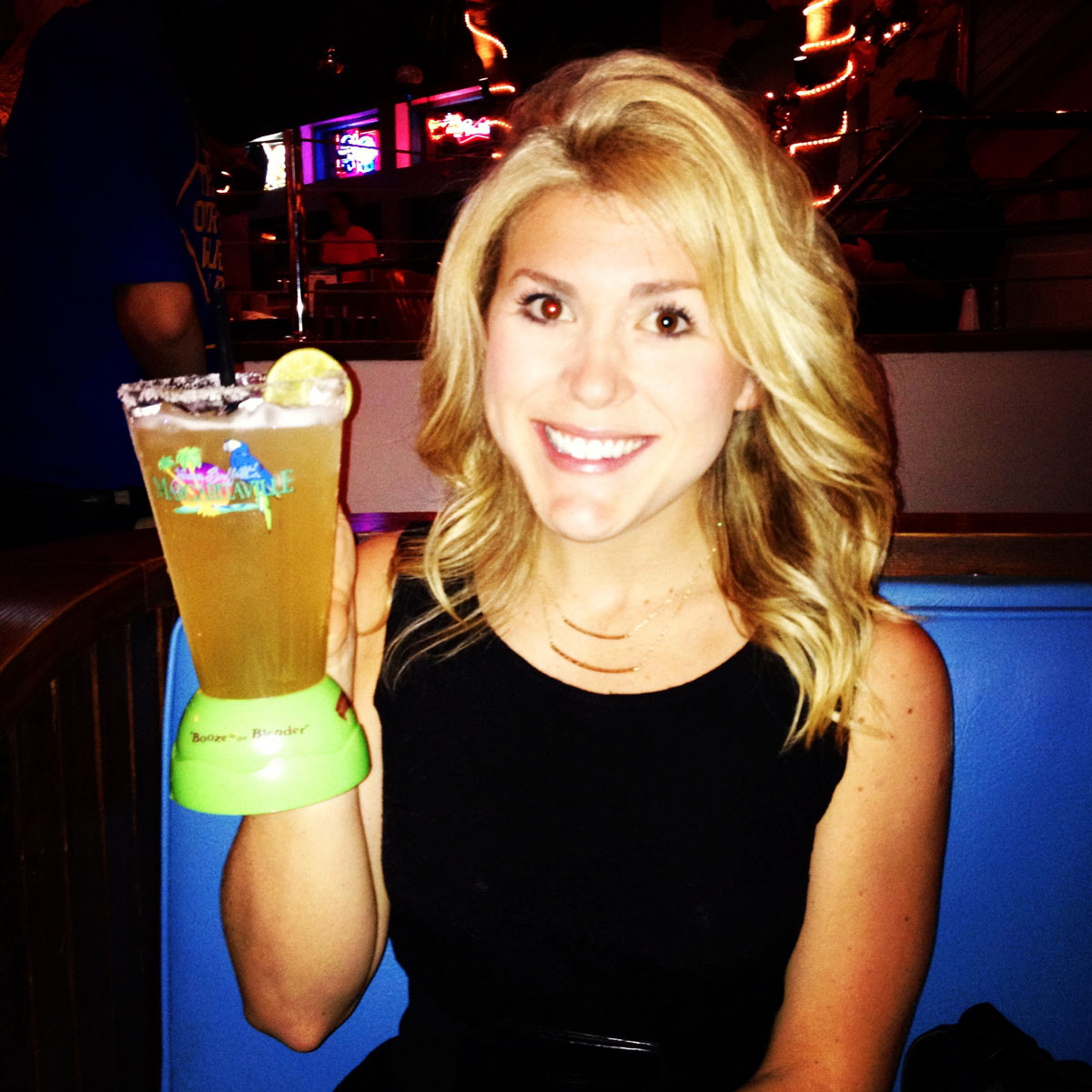 The White Cheddar Cheese Curds were served with LandShark Lager BBQ and marinara sauce.  They were breaded and fried (AKA not gluten-free) so I couldn’t sample them, but my three friends ate the entire plate and said they were delicious.

Next, they brought us the Beach Tacos, Asiago Crab Dip and “Drunken” Shrimp Skillet.

The beach tacos plate came with two tacos.  The first was Braised Pork Carnitas with salsa verde, cilantro and queso fresco.  The second taco had Carne Asada Steak, pico de gallo, cheese and cilantro.  I could only eat the insides because I believe the tortillas were made with flour, but the mixture was so incredibly flavorful.  It’s hard to say which one I liked better but I think the steak was my favorite. 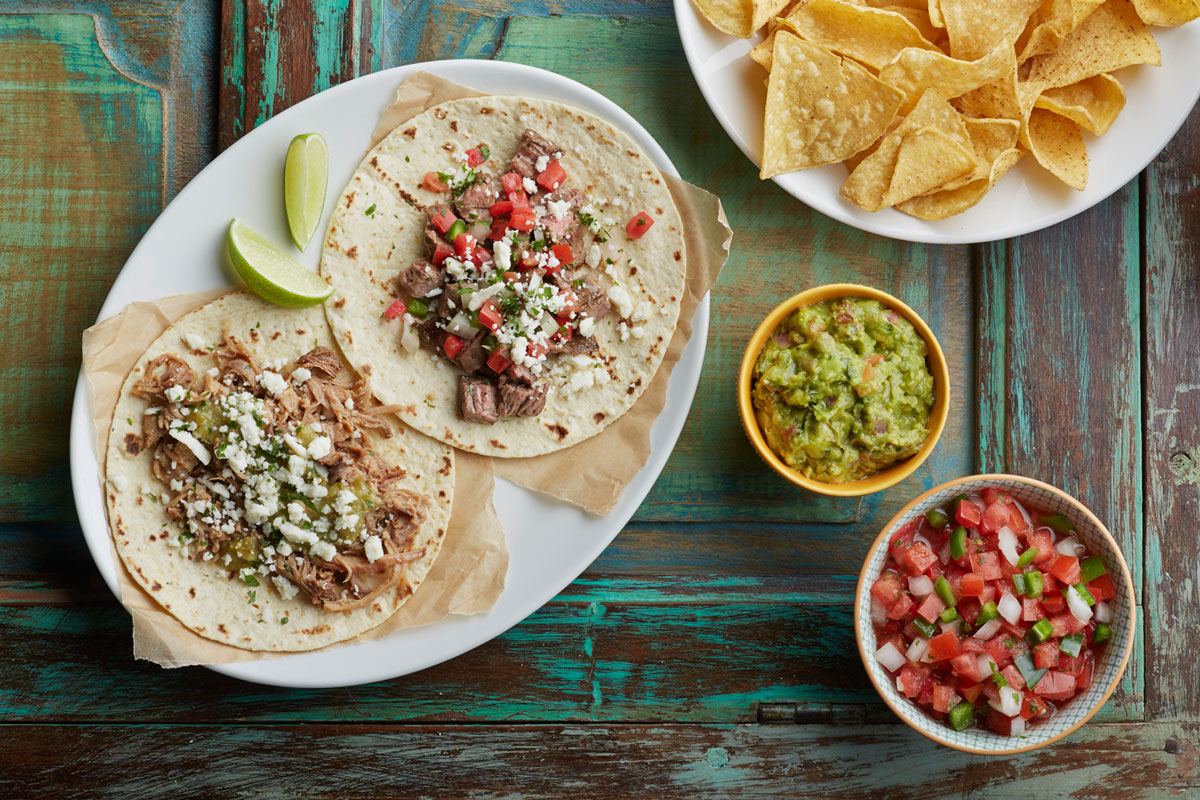 The Asiago Crab Dip was a huge hit with my three friends.  Lump crabmeat in a sharp asiago cheese cream served with grilled crostini.  It was covered with breadcrumbs and baked, and looked absolutely incredible!  My friends cleaned that plate, too!

The “Drunken” Shrimp Skillet is made of shrimp sautéed in tequila lime butter, roasted garlic and peppers.  It’s typically served with crostini, and when they brought out the dish, I picked at the shrimp in the delicious broth.  And then, the Executive Chef, Daniel Murray, appeared at our table with a specially prepared version of the appetizer for me!  He had grilled gluten-free bread for me to dip into the broth, and whoah!  It was out of this world!  My friends even said that they liked my gluten-free bread better than theirs!  This was my favorite appetizer of the evening. 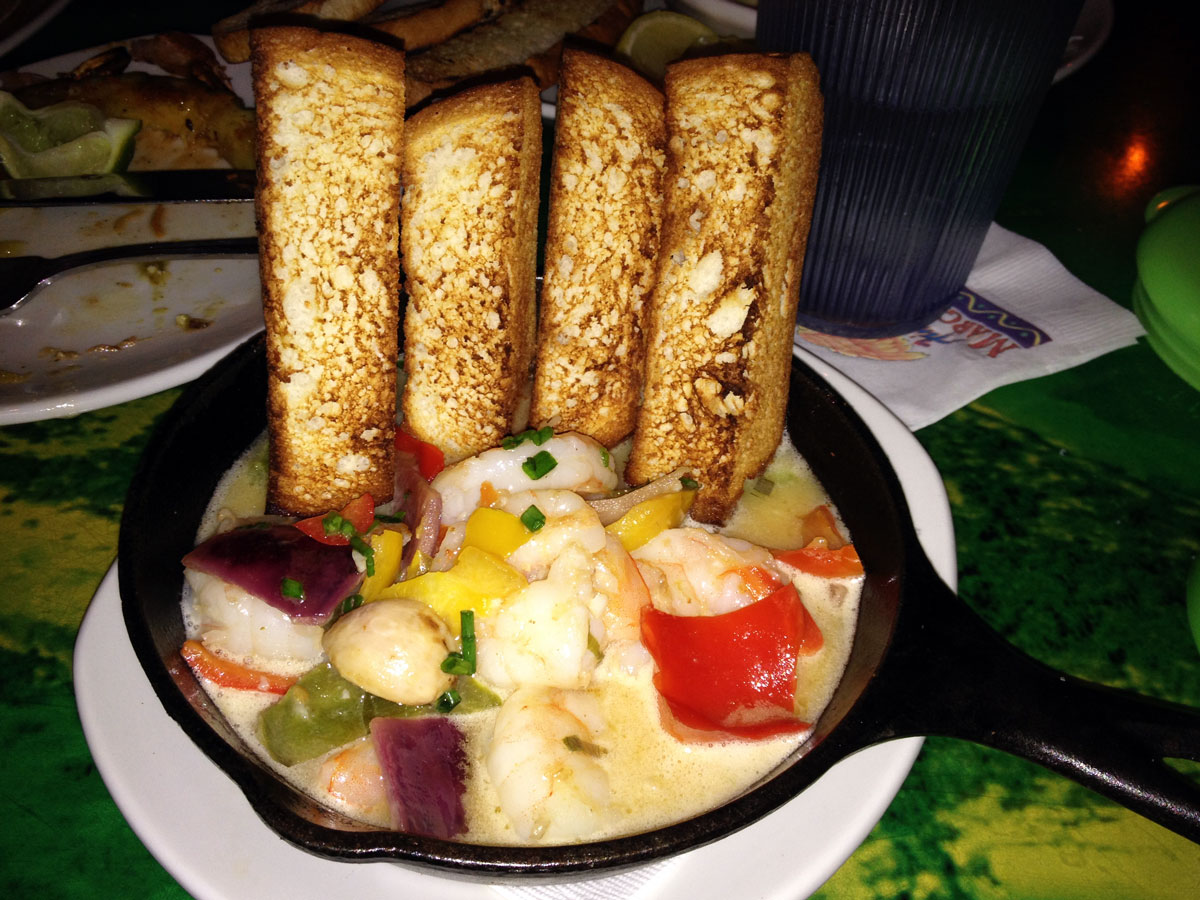 Chef Murray was so nice.  He talked to us about how he spearheaded the gluten-free menu at Margaritaville Orlando and it was just too cool that he came out to our table to talk to us.

As if the five appetizers they brought us weren’t enough, one of my friends was new to Margaritaville so we had to order the nachos, too… We did not finish them, I promise. 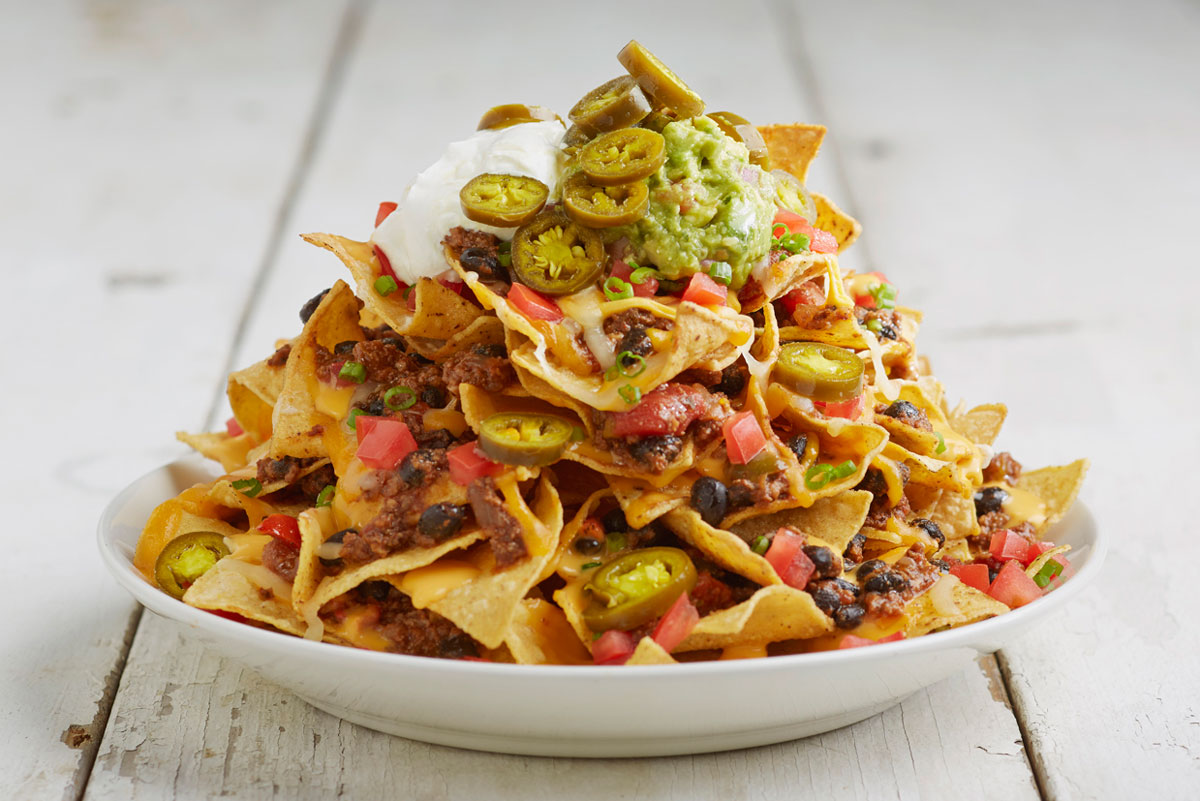 We were already stuffed, so of course, we ordered another round of margaritas to perk us up before the food came!  After some lovely conversation and another nice check-in from the chef, our entrées came.

My friend and I ordered the Black Grouper, served with island rice, green beans and mango salsa.  Yum!  It was just as delicious leftover the next day 🙂 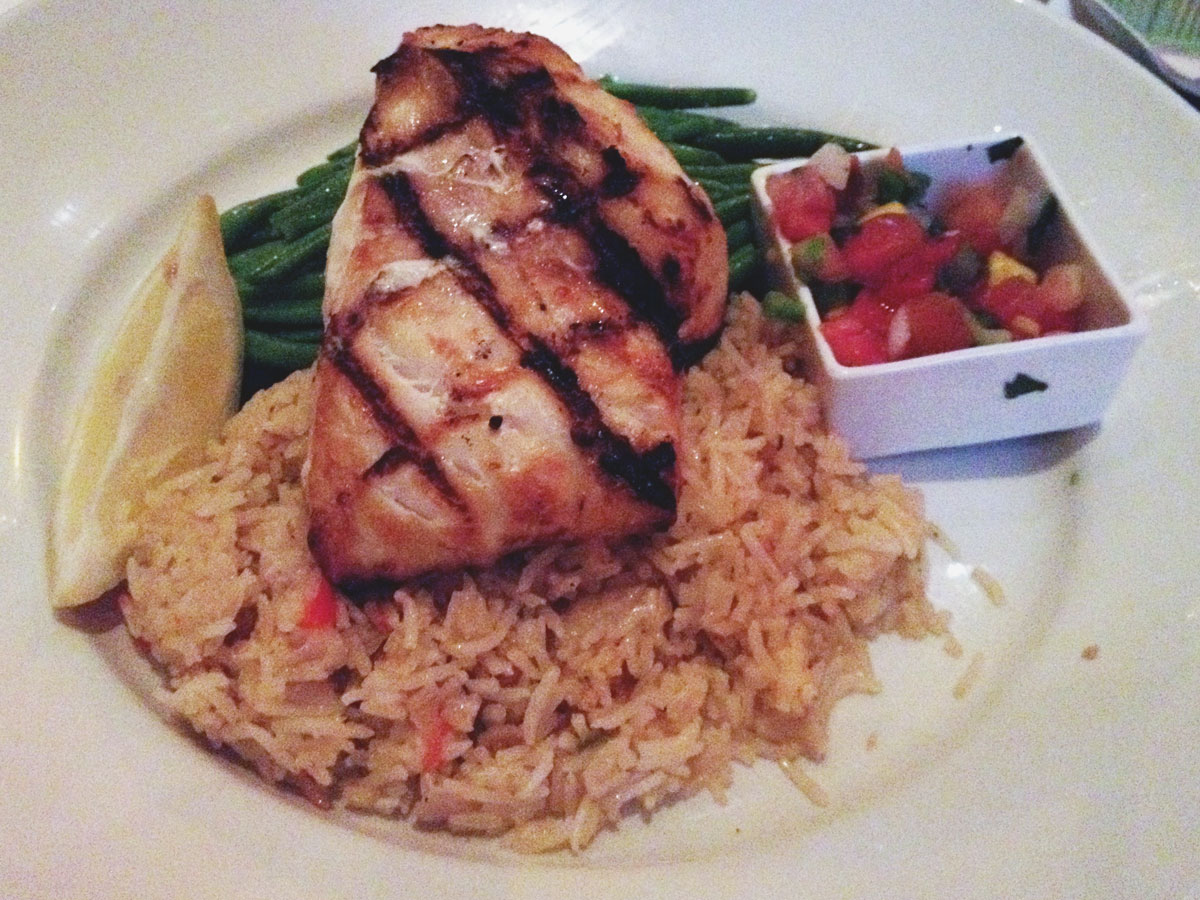 My boyfriend got the New York Strip Steak, which was served with green beans and Yukon Gold mashed potatoes loaded with cheese, Applewood-smoked bacon, sour cream and green onions. 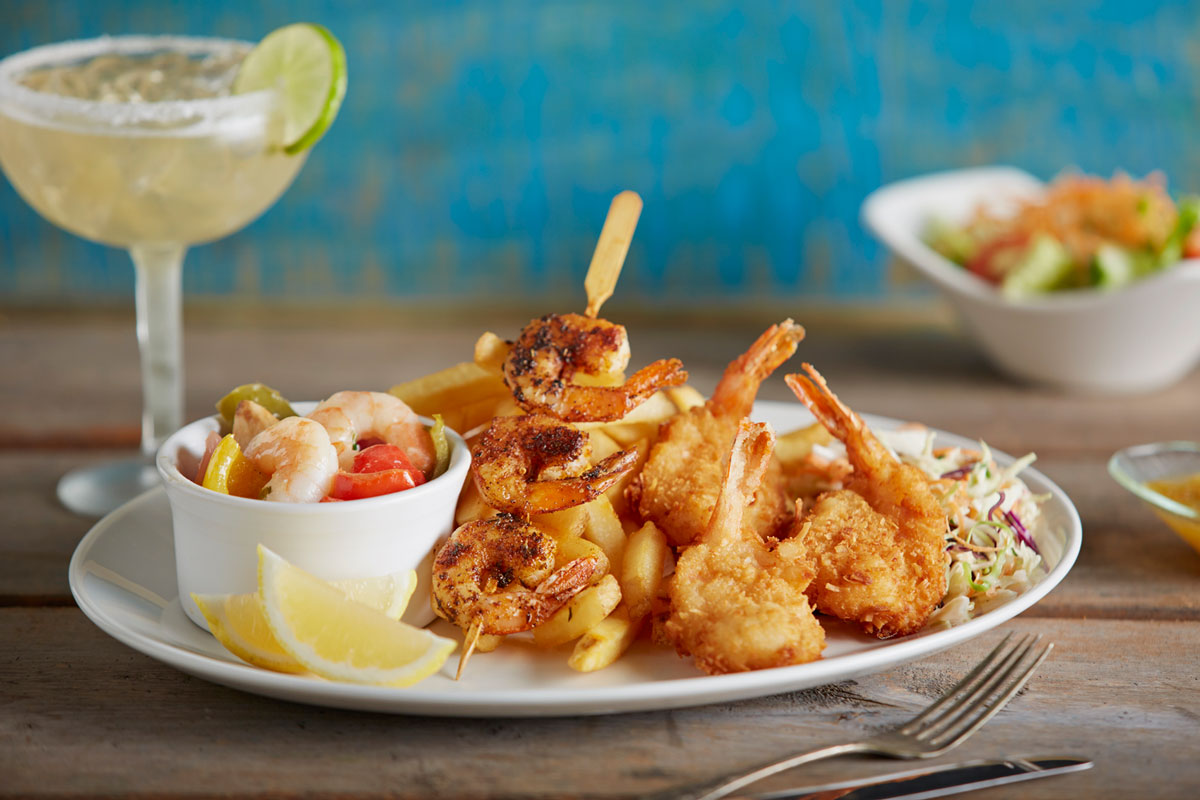 For the final course, they brought us two of their new desserts to sample.  A slice of creamy Key Lime Pie and the Chocolate Hurricane, which includes an entire pint of vanilla ice cream, two heaping piles of whipped cream, brownies, Kit Kat and Heath bars, pirouette and mini shortbread cookies, sliced banana and chopped macadamia nuts.  They serve it on a Lazy Susan tray, so you can swirl the dish in circles as they drizzle it with chocolate and caramel sauces.  Oh my goodness.

Now, here’s where I was completely blown away.  I was totally content to nibble from the ice cream and stay away from the non-gluten-free treats on that plate.  But Chef Murray came back with a specially made gluten-free version of the Chocolate Hurricane!  For the first time ever, he combined gluten-free brownies, vanilla bean ice cream, whipped cream, Heath bars, shaved chocolate pieces, crushed peanuts and of course, drizzled it with chocolate and caramel sauces.  I was beyond excited about my dessert and boy, it was awesome.

Here’s a video of us having way too much fun (now two margaritas and two shots of tequila deep) spinning the first ever gluten-free Chocolate Hurricane dessert while they drizzled the toppings.

We were there for three hours enjoying this feast.  The staff took incredible care of us and we had the most lovely evening.  I can’t wait to go back and try out more of the new items from the refreshed menu and re-order my new favorites. 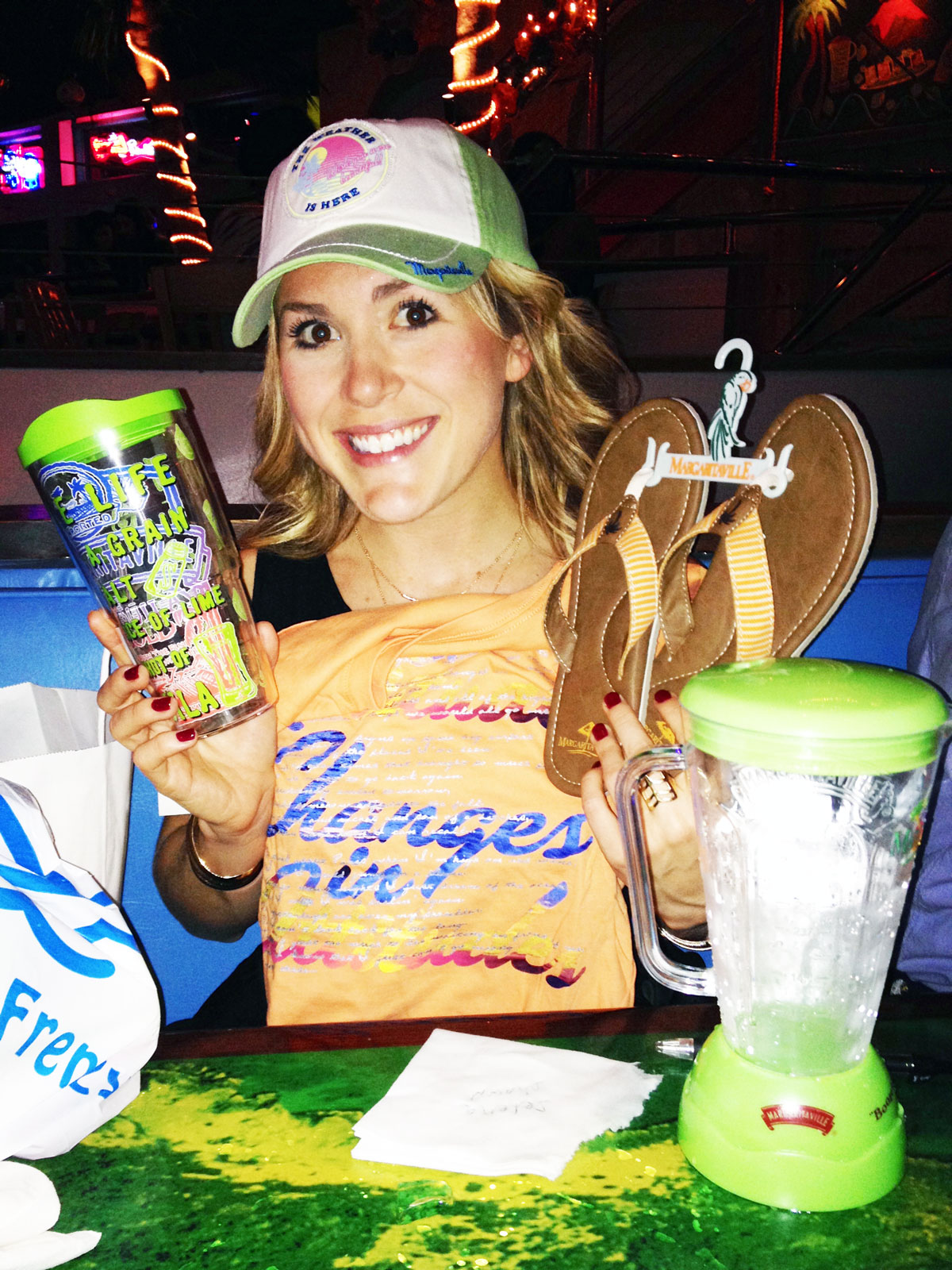